This week’s employee spotlight series features CognitiveScale’s Creative Director, Shea Sulkin. Shea shares the journey that ultimately led her here, how it feels to watch a startup grow from the ground up, and, of course, some wonderful perspectives about life. She is a thoughtful, empathetic, and confident leader, and I’m delighted to share her thoughts with you all!

For starters, I know you’ve been here at CognitiveScale for about five years—a long time for a startup! How has it been to experience all of the growth and change?

SS: Yes, five years already! It has changed quite a bit. A lot has stayed the same, but a lot has changed. Our business has evolved so much and it’s a real learning experience. My role has changed drastically. I started out as a Business Delivery Owner. At the time, that role involved me doing project and some product management for almost all of our projects, roles I had done previously. Because of my background in design, I then moved over to being our Creative Director.

Interesting. So how did you originally get to pursuing a career in design?

SS: That’s a good question. I took a very meandering path. I started out after college as a fashion designer, and I loved that work. Not long after, I went into the startup world and learned UI design. In working with a startup, I think you learn all parts of a business because you just have to! So I began picking up those skills among others, and it was a journey that taught me a lot of new things. I was in a consultancy business for a while, and then I co-founded a company called Aunt Bertha—focused on making human service program information more accessible to both people and programs—that still exists in Austin today.

After that, honestly, I was just interested in what AI could do for the world of healthcare, and that’s what originally led me here to CognitiveScale.

Wow. How did you transition from fashion to UI? Did you still enjoy being in fashion and just moved to where the trends were?

SS: It was actually really surprising how much similarity there was between fashion and UI design. You still have the same kind of team structure, you still have product managers, designers, and tech people, and the tools that you used at the time were actually the same. I used Illustrator in fashion and Illustrator in UI design. I think the primary challenge for me was the imposter syndrome and learning to relearn. I tried to absorb whatever I could from friends, from people I was working with, from YouTube videos, etc. This was all to learn the basic hard skills.

SS: Right! How to code and all of those skills, it was important knowledge.

Absolutely. I bet that paid off. What has been your favorite project that you’ve ever worked on?

SS: That’s a tough one! Experiences are all so different and valuable for the lessons they teach you. I would say my favorite project was the company that I was co-founding—Aunt Bertha. Building a company from nearly scratch feels like your tech child. There was a founder who had started a bit before me, and aside from that, I was the one seeing it develop from nothing, and that is an experience that you don’t get very many times in life. You put so much into it and you get to see it grow. You get to be a part of this amazing process, and ownership, and bring people in. It is such a challenging but exciting, rewarding time. 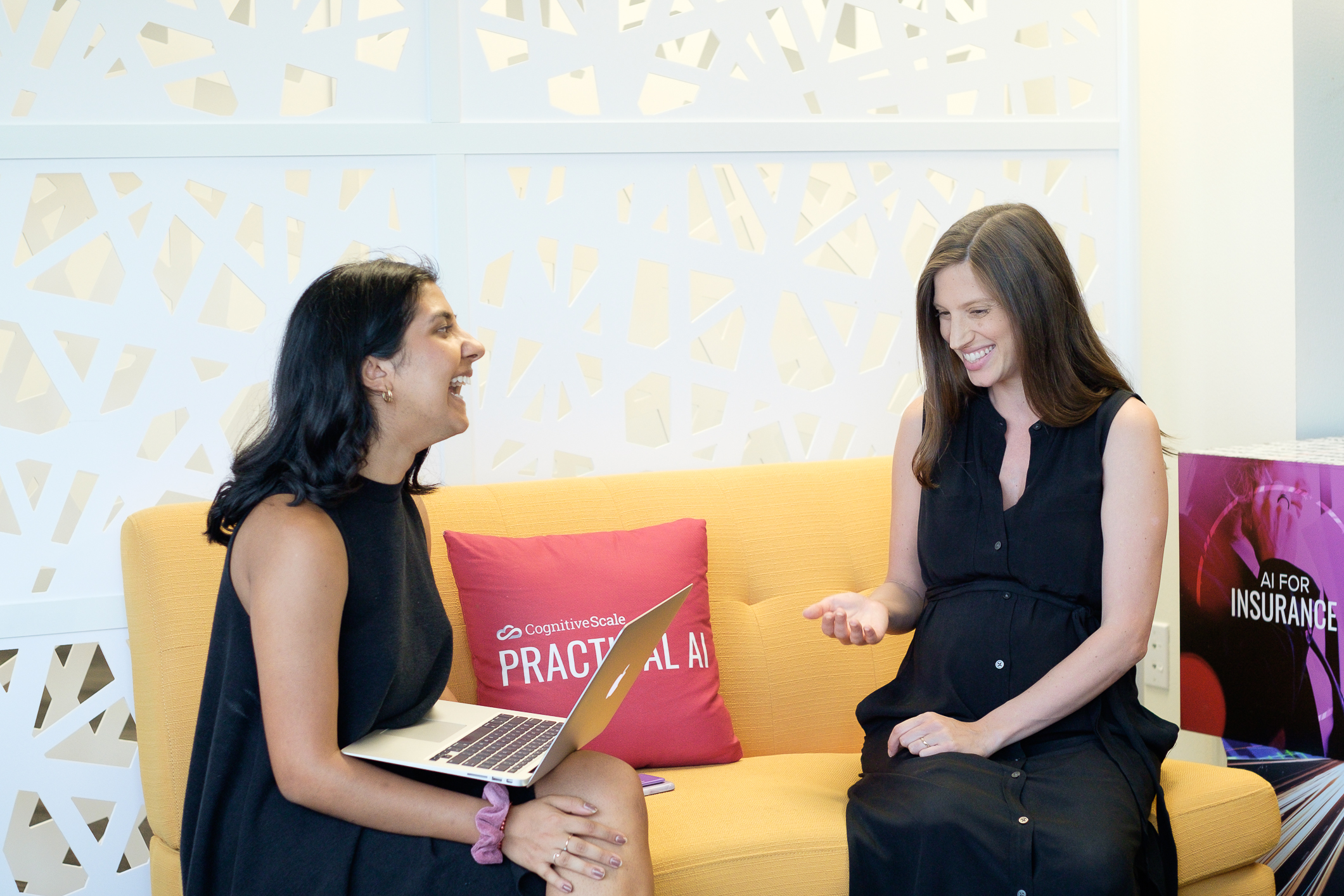 Great! What would you say most excites you about your job here at CognitiveScale, and can you talk a little bit about what you do on a day to day basis?

SS: Well, a large part of my role here is management, and I am truly obsessed with management. I really enjoy growing individuals and fostering a healthy culture.

I read your LinkedIn piece on it! It was fantastic.

SS: Oh, thank you! Well yes, so you kind of got an idea, but I think that the best part for me is working with the team. My day to day role is mostly making sure that their jobs run smoothly and that they have everything they need to be at their best. I’m in a lot of the projects with them, and it’s mostly the more complicated ones. I will help navigate things that are confusing or complicated, or things that don’t have enough information, or just step in if there’s too much work. Then, I also do a lot of things like team goals and activities to keep us motivated and growing as a group.

That is so important. Do you think that there are any misconceptions about the field of design that you wish people knew?

SS: I think just like any part of the business, people have an expectation of what design is, and that expectation is often a lot simpler than what it really is. People don’t have a solid understanding of the skills that go into it and why people are experts at it. Everyone can see things and understand visuals, and everyone has an opinion. This is great and appreciated, but it can also make it really difficult because everyone has an opinion and wants to be heard.

SS: Obviously we know that, and we kind of joke that a lot of what we do is the “sacrificial lamb” because that’s part of design. It’s this process of putting things out there and allowing everyone to get on the same page, which takes time. Prior to visuals, you’re just using words, and someone can easily say they agree or understand when they really just don’t. Once you see visuals, it’s easy—much easier—for the group to start to pick things apart and truly agree or disagree, which helps us move forward but also requires patience and diligence.

SS: Exactly. So I think that the misconception is just all of the skill, talent, time, and effort that goes into a design, and on top of that, the process that we take. It’s not just like us taking some willy nilly steps and throwing things together. There is this well-oiled machine that we didn’t come up with that designers generally follow.

Totally. Okay, sort of on the same train of thought, what has it been like, in school or the workplace, being a woman? I know you’ve been involved in a lot of tech endeavors, so maybe even that specifically.

SS: What a great question. It has been an experience, to put it simply! I’d say that I’ve mostly worked with majority men. However, in fashion design, I did work with predominantly women, which is a different experience. I don’t think it’s better or worse. I have been in the role of the only woman in the room many times, and I took a lot from one TED talk that talked about the way you physically present yourself, and all of the other things that women have to do to gain respect. Women have to try harder and be better, and for me, a balance of men and women is definitely better. At CognitiveScale, we have had a lot of female coworkers, maybe more so than other tech companies. Not as many at the executive level, which most companies struggle with, but more broadly. And that’s really cool.

Following up on that, what would your advice be to women that are in school and trying to pursue tech or corporate or any field?

SS: Well, I would say number one, know that reality presents us with this very long history of women being the lower class in the hierarchy. It’s not just you, it’s centuries of women. And it’s not just men to women. Women are oftentimes even more competitive. So I think it helps to recognize that and stand up for and support fellow women. I think it also helps, if you are comfortable doing so, to call things out when things are done that are…inappropriate or truly unfair, for lack of a better word. Don’t stop calling things out and don’t stop trying.

Exactly. It’s all about persistence and not lettings things slide.

SS: Right. And also, it does feel, when you look back at how things might’ve been one decade or ten decades ago, it is improving. As difficult as it is to imagine sometimes, we have come a long way, and we are only continuing that journey.

That’s true. I think it’s hard to get in that mindset, but there is an exciting aspect for sure. What is your dream job if you could do anything in the world?

SS: I think growing a team and getting to work on something that is moving humanity forward. I am getting to do some of that through my work here at CognitiveScale.

That’s awesome. I love that! Lastly…what or who inspires you?

SS: I think that’s people who are really good at what they do. People who persist and have accomplished work they should be proud of.

That could be great, inspiring designers—we’ve definitely worked with some here. Our partner, argodesign has some great designers we’ve worked with. Great managers, great leaders, great public speakers. I think it’s all really inspiring to keep learning and to motivate me to try harder.

I do love learning from people thriving in their fields. Well, thank you so much for your time today, Shea. Your passion for leading teams and producing such positive culture always teaches me something new and makes me feel excited about opportunities ahead!